Sustainable Putnam seeks to promote food and agricultural practices that support a healthy relationship to the environment. This includes information on what we can do as consumers to change shopping habits and diet towards that goal, including buying from farms that use more earth-friendly production methods.

How do our food choices affect the climate? There are two areas where we can make a change: buying food from local producers  when in season, and cutting down on our consumption of meat. The ever-increasing globalization of food has created  an array of choices in food year-round. The effect on the climate of eating summer fruits (peaches and cantaloupe for example) in the winter means that they must be shipped from the southern hemisphere, therefore creating a large carbon footprint from the oil and gas used to ship them. Restricting or cutting down on these purchases will not only reduce the climate effect of shipping, but will put us more in sync with what is healthier for our bodies as well- local food that is in season and that has not been genetically altered or picked unripe to withstand long transportation distances.

Studies show that meat production also has a large footprint—not only in shipping these products from distant countries to our own, but in land use. In the last decade large areas of the Amazon rainforest have been cut down to make way for industrialized meat production, primarily beef. In 2019 satellite images showed evidence of this rainforest being ravaged by fires illegally set by ranchers with the tacit support of the Brazilian government. The Amazon plays a role in cooling the planet by pulling CO2 out of the atmosphere, and also has the highest biodiversity of anywhere on earth. It is vitally important to the plants, animals and indigenous people who call it their home.

Beef and lamb in particular have a large carbon footprint because they are inefficient to produce and require large resources of land, water and feed. According to the World Resource Institute, beef requires 20 times more land and creates 20 times more greenhouse gas than beans grown on the same land. Chicken and pork require 3 times more.

Because beef is more widely consumed than lamb, it is of the greatest concern. A 2013 study by the United Nations found that animal agriculture accounted for 14.4% of all greenhouse emissions, while beef accounted for 41% of that figure. The World Resource Institute estimates that beef accounts for half of land use and CO2 emissions associated with diets in the United States, but produces just 3% of the calories.

What Can We Do?

The clearest answer is to cut down on meat consumption, beef and lamb especially. Eating meat only once a day and having “meatless Monday” dinners are a good start. Meatless Monday is a global movement started in 2003 encouraging us all to go vegetarian on Mondays (though the tradition actually goes back to World War I when Americans were asked to cut back on meat to support the allies and troops in Europe). Another way to cut meat consumption is to use recipes where meat is a flavoring component of the dish rather than being the star attraction. Below is a link to the Meatless Monday website, where you will find more information:

And here’s some more meatless recipes:

75 Reasons to Get Behind Meatless Monday

We can also buy meat locally. Often there are farmers selling meat products at farmer’s markets. (see links below).

Buying locally cuts out transportation effects harmful to the climate, and also supports local agriculture. Further the farm practices used by small farmers are not industrialized farming techniques—the practices that rely on thousands of animals crowded together in a tight space, feed heavy doses of antibiotics and corn instead of pasture grass. Buying local means you would have the opportunity to ask the farmers about how they raise their animals. Though the cost of these meats are higher than in the supermarket, so is the quality. Grass-fed animals have higher levels of nutrients such as Omega 3, linoleic acid and vitamin E. Buying meat directly from farmers and paying a higher price for it will have the effect of reducing how much meat we eat, and work towards transforming the role of meat in our diet as we place value on the quality and begin to see the meat as a special part of a meal rather than a given.

Here is a link to area farmers markets that may sell local meat as well as local produce: click here.

Creating a Sustainable Future, wild fish catch peaked in the 1990s. The oceans in some areas of the world are depleted of fish. Climate change plays a big part in this; Overfishing is another contributing factor.

The Ocean has absorbed most of human induced warming. Yet that rate of warming is rapidly increasing, upsetting the delicate ocean ecosystem. Warming contributes to decreased oxygen levels and acidic water all of which have the effect of destroying fish habitats and coral reefs, promoting the growth of pathogens that increase diseases in animals, plants and humans, and reducing the fish population overall. Phytoplankton- the tiny plants that provide food for ocean fish—are responsible for an estimated 50 – 80% of the world oxygen supply through photosynthesis—the same process as plants on land of capturing water, light and CO2 to produce oxygen. Increased warming directly affects our oxygen supply as it decreases the production of these important plants in the food chain. Ocean warming also contributes to stronger and more frequent hurricanes, severe flooding in some areas of the world and drought in others—these also have effects on the food supply on land as well.

Besides global warming, the second cause of reduced fish availability is overfishing—particularly wealthier countries overfishing off the coast of poorer countries, significantly reducing this precious food source and drastically affecting the livelihood of people in these countries. The United States, with 5% of the world population, is the second biggest consumer of fish in the world after China. So like with meat, our choice to eat fish- how much and what kind- is an environmental and political issue as well.

What Can We Do?

Sustainable means fish that is caught leaving enough of the species in the ocean to replenish the population, using fishing practices that do not harm other fish species or the environment. In a global context, it also means leaving enough fish in the ocean for people around the world that depend on fish for their main source of food.

In the US, fisheries are managed by the National Oceanic Atmospheric Administration. “Fisheries” are not actual physical entities, but rather refer to businesses that have been given the legal right to fish off the coastal US; their fishing plans- where they fish, what type of species and how much- are monitored. This website link allows you to learn about the level of sustainability of different fish species according to the NOAA’s standards:  click here. Fish in the US are also rated as sustainable by a private nonprofit, the Marine Stewardship Council. The Council was formed in 1992 in response to the collapse of Canada’s Grand Banks cod fishery that caused thousands of individuals working in the industry to lose their jobs. Industry and environmental leaders created ihe MSC to create a system of certification for wild, sustainable seafood and a label for seafood that qualified. (Their label for sustainable seafood is at left). Use of the label got a big boost in 2006, when Walmart agreed to begin selling fish that had the sustainable label. Other big box stores followed, including Whole Foods. However, it should be noted that some have criticized NOAA for cutting corners as they became flooded with requests for sustainability certification. It is the opinion of many environmentalists that this system is flawed- but better than no system at all.

How About Farmed Fish?

50% of the fish we eat globally comes from fish farms (also known as aquaculture). Fish farms are closed entities in ponds, rivers, lakes, near coastal waters and in cages out at sea. Most of the farmed fish eaten in the US is imported from countries with scant regulation. The problems with fish farms are some of the same issues that plague livestock “factory farms”—overcrowding, artificial feed, parasites, antibiotics, and pollution or interference with the natural environment. While some aquacultures such as those for oysters and seaweed have a positive effect on the environment, a change in the way most farms are run is needed before the fish can be considered a healthy source of fish.

One small, but positive form of aquaculture is “aquaponics” where fish are grown in a closed cycle in a greenhouse. Once such producer is Cabbage Hill Farm in Mount Kisco, which sells fish at the John Jay Homestead Farmers’ Market in Katonah (check the John Jay website to see dates they are selling there).

Another issue with seafood to keep in mind besides sustainability is the level of mercury in the fish. Although Mercury is naturally occurring in nature, large quantities entered the food chain through coal and mineral mining. Generally, fish that are high in the food chain where mercury is concentrated are the fish to avoid- swordfish and tuna among them. Below is a chart from the non-profit Food and Water Watch that gives guidance about which fish are best to purchase for sustainability and health. You can view the file here. 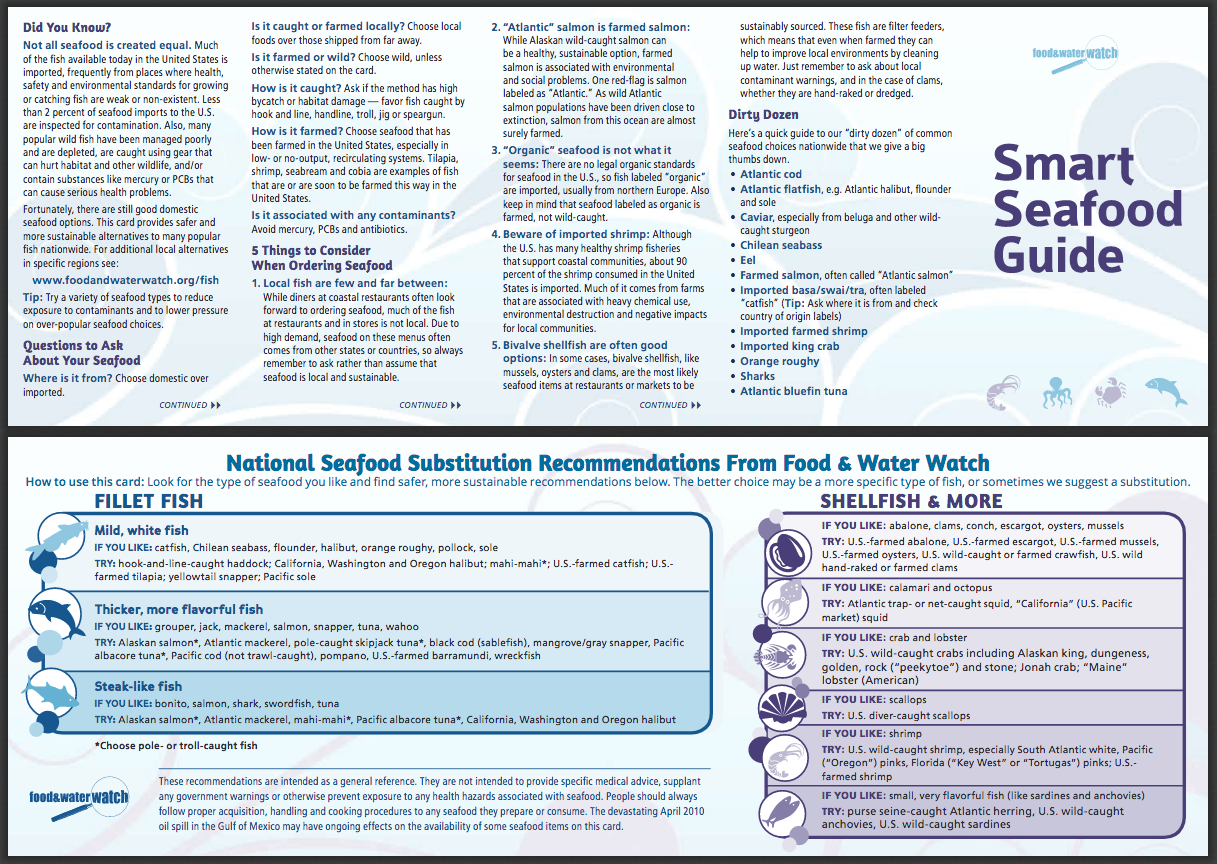 In recent generations, our experience with food is that of a consumer: a relatively inactive sponge at one end of the industrial food system. We dream up what we crave (or more likely crave what we view on a screen), and go out to purchase it at a restaurant, pre-made at a supermarket, or at best, find the ingredients at a supermarket with out-of-season ingredients from around the world, manufactured in industrialized farm factories, grown, harvested, processed, and transported with a huge subsidy of carbon-spewing, air polluting, limited-availability fossil fuels.

We need instead to become thoughtful participants in our local ecosystems. Instead of asking “What do I want for dinner?” and relying on a carbon-intensive food system, we need to ask “What’s available for dinner?”, look to preserved, prepared, and fresh foods from local farms, local butchers, bakers, cheese makers, and farm-to-table restaurants.

Or better yet, shift our lifestyles from mere consumers to part-time producers as well. Most of us are quite capable of growing some herbs and vegetables; preserving foods using forgotten techniques: making yogurt, pickles, canning or freezing local produce; harvesting produce from “U-Pick” farms or farm stands, and preparing, and cooking them ourselves.