Save energy and decrease your costs.

Step 2 is one of the easiest and quickest ways to reduce your energy bills!

Purchasing and replacing every LED light bulb in your home or office can pay for itself in months. After that you’re saving money for the life of the bulb — which On average, about 15% of total home energy use is used for lighting. Converting all of your lighting to LED  can reduce lighting energy costs by 90%.  The Department of Energy estimates that on average,  if you switch all of your lighting to LEDs, you’d save $225 every year.  That’s $2,250 every decade!

See below for to learn more…

LED lighting: an easy step toward toward clean energy

If you weren’t happy with the first LED bulbs you tried, you may be in for a surprise. Since its earliest residential use in 2002, LED lighting has seen dramatic improvements.

Quality, variety, and features such as dimming and switchable color are now available, and prices have dropped dramatically. LED bulbs and fixtures are now available for  pendant, under cabinet, recessed, and other fixtures. And new LEDs now last up to 25 times longer than incandescents. You’ll save the time and expense of replacing bulbs too. Check for the ENERGY STAR symbol to for the most efficient LEDs.

Did you know that LEDs are so cost-effective, that it pays to replace compact fluorescent light bulbs (CFLs) too? Most CFLs contain mercury, so be sure to return them to a home goods store for proper disposal.  Ask for the recycling bin location at the Customer Service desk.

There are a few simple things to keep in mind when purchasing LEDs: brightness, measured in lumens, and color, measured on the Kelvin scale, (for example, 2700K indicates a “warm”, while 5600K indicates “daylight” color). Click below for an excellent LED Lighting Guide is available from Central Hudson Gas & Electric utility including information about brightness, color, and wattage equivalency. You can also use a nifty LED Calculator  to estimate how much money you’ll save by switching out your light bulbs! Click the button below.

Conduct a household inventory to ensure that you’re replacing all of your LEDs. If you have kids or grandkids, this could be a fun and rewarding activity to do together.

Call it a “Light Bulb Hunt” and challenge them to find every bulb in your home. Tweens and teens could do this on their own.  Celebrate the accomplishment with a treat!

Grab a clipboard and pencil and write a room-by-room list of every bulb you find to complete your inventory. 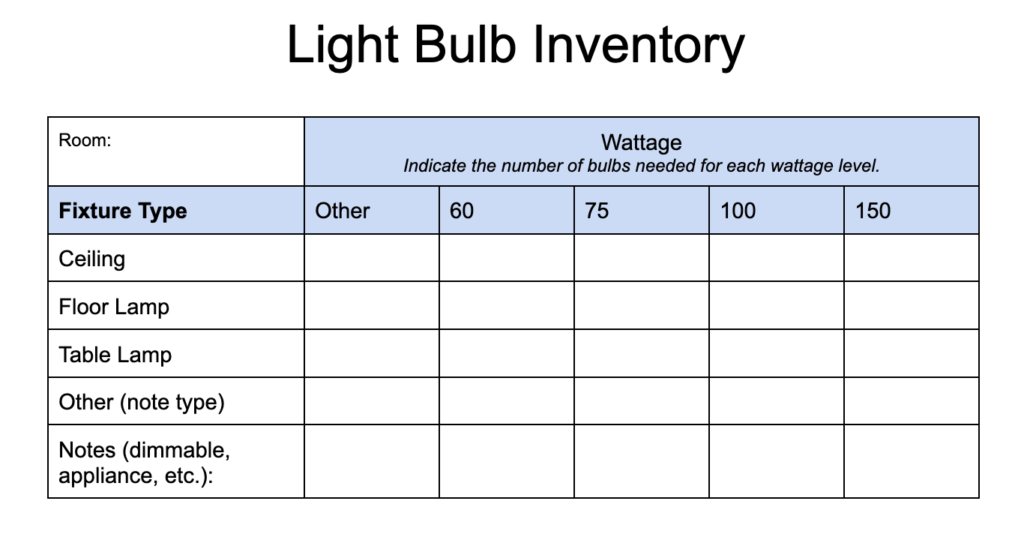 Appliances such as refrigerators require special “Appliance” bulbs that can withstand cold and freezing temperatures. Recessed lighting may simply require an LED bulb replacement, or the entire fixture can be replaced with an LED recessed lighting retrofit kit available at home goods stores. Pendant and under cabinet lights often use special halogen or xenon bulbs. Again, an entirely new fixture or retrofit kit may be the way to go. Consult an electrician for details and installation.

Where to Purchase LEDs

The typical 60 watt equivalent LED bulbs can be found at drugstores supermarkets, and discount stores. The best variety and options can be found at hardware and home goods stores, or online at specialty retailers online such as 1000Bulbs.com or Lampsplus.com.

Central Hudson Gas & Electric utility has an excellent LED Lighting Guide with information about where to buy LED bulbs with a special discount for Central Hudson customers, and how to choose LEDs. Their website also features a nifty LED Calculator to

Check out NYSEG’s online store too. We’ve seen 60 watt LED bulbs for less than $1 there! Click to visit the NYSEG Smart Solutions online store to find everything from light bulbs to intelligent thermostats. At this time, Central Hudson doesn’t maintain an online store, but does offer discounted prices at area retailers. Click here to learn more.

LED fixtures can be found at any retailer that carries lighting fixtures, including home goods and lighting stores.

A Brief History of Lighting: from Edison to LEDs

Just about everyone knows that Thomas Edison invented the electric incandescent light bulb. A breakthrough that replaced candles and whale oil lamps, incandescent bulbs are nonetheless extremely inefficient. In fact, only 10% of the energy required is converted to light. The remaining 90% is released as heat.

Fluorescent lighting was a major improvement in efficiency that significantly reduced energy costs. But early fluorescent lights provided a severe “color rendering” that made faces look green and ghostly. They were also limited to tube shapes, making them impractical for table and floor lamps. Compact Fluorescent light bulbs, or CFLs, were a major innovation in the 1990s, allowing CFL replacement in a variety of fixtures.  As a costly replacement for incandescent bulbs, they did pay for themselves in energy savings, but most contain trace amounts of mercury, making them a waste disposal hazard. And many CFLs still had the color rendering problem.

Enter the LED or “light-emitting diode” bulb which became available for residential use in the early 2000s. LEDs use only 10% of the energy of an incandescent, and about a third the energy of CFLs. It makes financial sense to replace both incandescents and CFLs as soon as possible.

Manage Cookie Consent
To provide the best experiences, we use technologies like cookies to store and/or access device information. Consenting to these technologies will allow us to process data such as browsing behavior or unique IDs on this site. Not consenting or withdrawing consent, may adversely affect certain features and functions.
Manage options Manage services Manage vendors Read more about these purposes
View preferences
{title} {title} {title}